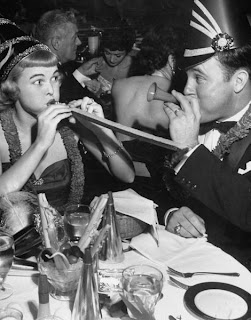 New Year's Eve 1952, from the Life photo archive on Google Images. This woman won the "Prettiest Teacher in America" contest sponsored by "Our Miss Brooks." Who the guy was or what he did is not mentioned. I'm sure they both went on to loathe hippies.
When my sister used to live in Troy, one of the highlights of my visits to her was reading "Sound Off!" in the Troy Record. A lot of small-town papers have these leave-your-comment columns. I loved it because it showed that the voice of the people is, in general, p.o'd. Here's a sample from yesterday:

It's 7:08 a.m. Dec. 22, I'd like to know why the Department of Public Utilities always manages to plow out an employee on Sixth Avenue. If they're going to do private plowing, I'd like them to do mine. I live on the next corner at 107th. Just drove by and saw this.

I could read this stuff for pages, if newspapers still had more than one page, that is. The LA Times has a version of this in the Saturday sports section, only it's more self-satisfied and "humorous", like (and I'm making this up): "I'll gladly take Andruw Jones off the Dodgers' hands. I have a teenage son, so I'm used to having someone unproductive who does nothing but eat." It's really all they can do not to use exclamation points -- then it would really sound like Dave Berg in "Mad" magazine.

Well, our valedictory reading, the one that's making the all-important last impression, sounds like "Sound Off!" in the Troy Record. It's Thomas Carlyle talking to the young people at the University of Edinburgh, and after some throat-clearing about how Books Are Good he wanders into a digression about Oliver Cromwell:

I should say also of that Protectorate of Oliver Cromwell’s, notwithstanding the censures it has encountered, and the denial of everybody that it could continue in the world, and so on, it appears to me to have been, on the whole, the most salutary thing in the modern history of England.

Continuing to wander, Carlyle starts to frag his own profession: "In general, I hardly think that out of common history-books you will ever get into the real history of this country, or ascertain anything which can specially illuminate it for you, and which it would most of all behoove you to know." Which leads to another digression about the good old days of the aristocracy, before the Stuarts ruined it:

...the King, with a beautiful approximation to accuracy, [would] nominate this kind of man; saying, “Come you to me, sir. Come out of the common level of the people, where you are liable to be trampled upon, jostled about, and can do in a manner nothing with your fine gift; come here and take a district of country, and make it into your own image more or less; be a king under me, and understand that that is your function.” I say this is the most divine thing that a human being can do to other human beings...

"Come you to me, sir." This might be the craziest reading of the year. Maybe the Compiler wanted to simulate the experience of talking to a old drunk coot on New Year's Eve, in order to suggest that perhaps we've stayed too long at the party. Well, I can take a hint.

* * *
And with that, I'm out. I'm surprised I got to the end, frankly, but I wouldn't have made it into March without knowing that a few hardy souls were out there reading. So, thank you heartily. I am tempted to draw conclusions, but I rather think that, like Mary, I should ponder in my heart some first. I will say that I intend to gather the readings up, do the twenty or so days I missed, make a futile attempt to simplify my sentence structure, and publish the results in a little booklet on one of those Creative Space/Amazon deals. (My working title: The Knowledge-Faker's Almanac.) It's more to have it up on my bookshelves -- a souvenir of a deer I killed -- but drop me an e-mail (my address is on the sidebar) if you want to be notified in the event this ever really happens.

And for 2009, I'm just reading books subtitled "How Small Unlikely Item X Changed The World By Doing Thing You've Never Heard Of Y." That should take me quite a while. Happy New Year, y'all!
at 11:11 AM

Thanks for a year's worth of humorous insights into classic literature (although I've only been following for six months or so). It's been fun tagging along on your vicarious journey!

Do let me know when the book's out.