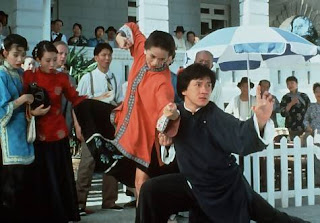 From "Drunken Master," an epic for our time.
You know how you'll be watching an action movie, or a kung fu movie especially, and the hero is like one on six, and you're wondering, "Why don't they all fight him at once?" It's just the same in the slam-bang conclusion to the Odyssey -- killing time has come, and the suitors decide to fight Odysseus one at a time:

Therewith he [some suitor guy] drew his sharp two-edged sword of bronze, and leapt on Odysseus with a terrible cry, but in the same moment goodly Odysseus shot the arrow forth and struck him on the breast by the pap, and drave the swift shaft into his liver. So he let the sword fall from his hand, and grovelling over the table he bowed and fell, and spilt the food and the two-handled cup on the floor...[nice insert shot, that -- ed.]

Then Amphinomus [a different suitor guy] made at renowned Odysseus, setting straight at him, and drew his sharp sword, if perchance he might make him give ground from the door. But Telemachus was beforehand with him, and cast and smote him from behind with a bronze-shod spear between the shoulders, and drave it out through the breast, and he fell with a crash and struck the ground full with his forehead...

And there's another action-movie trope -- everyone shoots at the hero and misses. At least this time it makes sense because 1) they're throwing spears and 2) a goddess is involved:

Then once more the wooers threw their sharp spears eagerly; but behold, Athene so wrought that many of them were in vain. One man smote the doorpost of the stablished hall, and another the well-fastened door, and the ashen spear of another wooer, heavy with bronze, struck in the wall.

I mean, you must have seen this kind of thing a hundred times, right? Well, this must be one of the first time it happens. That's why they're called the Classics.

There are two things in this reading that aren't in our modern action movies, though. The first is something I've always wanted to see. After the big final action sequence, I generally find myself wondering, "Who's going to sweep up all the broken glass?" In Odysseus's time it was the servants:

‘Begin ye now to carry out the dead, and bid the women help you, and thereafter cleanse the fair high seats and the tables with water and porous sponges. And when ye have set all the house in order, lead the maidens without the stablished hall, between the vaulted room and the goodly fence of the court, and there slay them with your long blades, till they shall have all given up the ghost and forgotten the love that of old they had at the bidding of the wooers, in secret dalliance.’

Oh, and that's the second thing -- the women who were collaborating with the suitors must be slaughtered en masse. (In fact, Odysseus's son Telemachus notes that a clean death for them would bring dishonor on the house.) The end of the Odyssey, I guess, is a huge tribute to the double standard -- Odysseus, who you may recall managed to sex Calypso every night, is the big hero, but killing is to good for the servant girls who hung out with the suitors while Odysseus was away (for twenty years). Well, no one said that the action genre was a genre of justice.
at 5:41 PM