The last chord fades. The night is cold and fine. 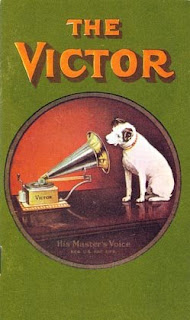 This weekend, while I was musing on the end of this project, this poem by James Merrill popped into my head. In my spaniel-like devotion to my readings, I identify with the title character; I'm aware it's very self-dramatizing for me to do so. However, I wouldn't be the first person to be self-dramatizing around the holidays. Anyway:


Bix to Buxtehude to Boulez.
The little white dog on the Victor label
Listens long and hard as he is able.
It’s all in a day’s work, whatever plays.

From judgment, it would seem, he has refrained.
He even listens earnestly to Bloch,
Then builds a church upon our acid rock.
He’s man’s—no—he’s the Leiermann’s best friend,

Or would be if hearing and listening were the same.
Does he hear? I fancy he rather smells
Those lemon-gold arpeggios in Ravel’s
“Les jets d’eau du palais de ceux qui s’aiment.”

He ponders the Schumann Concerto’s tall willow hit
By lightning, and stays put. When he surmises
Through one of Bach’s eternal boxwood mazes
The oboe pungent as a bitch in heat,

Or when the calypso decants its raw bay rum
Or the moon in Wozzeck reddens ripe for murder,
He doesn’t sneeze or howl; just listens harder.
Adamant needles bear down on him from

Whirling of outer space, too black, too near—
But he was taught as a puppy not to flinch,
Much less to imitate his bête noire Blanche
Who barked, fat foolish creature, at King Lear.

Still others fought in the road’s filth over Jezebel,
Slavered on hearths of horned and pelted barons.
His forebears lacked, to say the least, forbearance.
Can nature change in him? Nothing’s impossible.

The last chord fades. The night is cold and fine.
His master’s voice rasps through the grooves’ bare groves.
Obediently, in silence like the grave’s
He sleeps there on the still-warm gramophone

Only to dream he is at the première of a Handel
Opera long thought lost—Il Cane Minore.
Its allegorical subject is his story!
A little dog revolving round a spindle

Gives rise to harmonies beyond belief,
A cast of stars . . . Is there in Victor’s heart
No honey for the vanquished? Art is art.
The life it asks of us is a dog’s life.