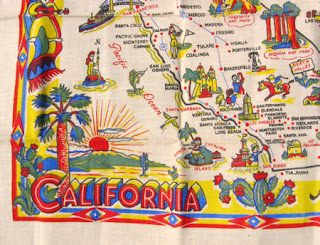 The state, the lifestyle, the tablecloth. You spilled gravy on San Diego!

Today Richard Henry Dana's ship is trading in Monterey in 1835, I think it is. While Dana is taking pains to show his East Coast audience how different the place is, the modern California resident can read it looking to see what's the same.

Prejudice against California, first of all: "The Californians are an idle, thriftless people, and can make nothing for themselves." It's also, of course, filled with Mexicans, as it is, at this time, actually in Mexico. But there are still plenty of Eurocentric racists around:

Generally speaking, each person’s caste is decided by the quality of the blood, which shows itself, too plainly to be concealed, at first sight. Yet the least drop of Spanish blood, if it be only of quadroon or octoroon, is sufficient to raise them from the rank of slaves, and entitle them to a suit of cloathes...and to call themselves Españolos, and to hold property, if they can get any.

Also, though there are no Beverly Hills as of yet (just "Hills"), we do see this stereotype as well:

The fondness for dress among the women is excessive, and is often the ruin of many of them...Nothing is more common than to see a woman living in a house of only two rooms, and the ground for a floor, dressed in spangled satin shoes, silk gown, high comb, and gilt, if not gold, ear-rings and necklace. If their husbands do not dress them well enough, they will soon receive presents from others.

Mm-mm-mm (shakes head). Of course, the women can scarcely be blamed -- California is a playground even then: "Monterey is also a great place for cock-fighting, gambling of all sorts, fandangos, and every kind of amusement and knavery." Fandangos! Every kind of knavery! Dana might as well call it "the land of fruits and nuts," like some old dude back East.

Another thing that Dana found in Monterey that we still have out here is beefcake. I'm going to quote a lot of it because it also shows that the mid-19th century audience was more open to unashamed descriptions of manly beauty than we are. I know, I know -- Whitman already proves that. But Whitman was...well, artistic, whereas Richard Henry Dana was a respectable U.S. Attorney:

One of them I shall always remember as the best specimen of the thoroughbred English sailor that I ever saw. ..He was tall; but you only perceived it when he was standing by the side of others, for the great breadth of his shoulders and chest made him appear but little above the middle height. His chest was as deep as it was wide; his arm like that of Hercules; and his hand “the fist of a tar—every hair a rope-yarn.” With all this he had one of the pleasantest smiles I ever saw. His cheeks were of a handsome brown; his teeth brilliantly white; and his hair, of a raven black, waved in loose curls all over his head, and fine, open forehead; and his eyes he might have sold to a duchess at the price of diamonds, for their brilliancy. As for their color, they were like the Irishman’s pig, which would not stay to be counted, every change of position and light seemed to give them a new hue; but their prevailing color was black, or nearly so. Take him with his well-varnished black tarpaulin stuck upon the back of his head; his long locks coming down almost into his eyes; his white duck trowsers and shirt; blue jacket; and black kerchief, tied loosely round his neck; and he was a fine specimen of manly beauty ... his captain said he was a perfect seaman, and worth his weight in gold on board a vessel, in fair weather and in foul. His strength must have been great, and he had the sight of a vulture.

It is strange that one should be so minute in the description of an unknown, outcast sailor, whom one may never see again, and whom no one may care to hear about; but so it is. He called himself Bill Jackson; and I know no one of all my accidental acquaintances to whom I would more gladly give a shake of the hand than to him.